These are the first two models I've competed this year. 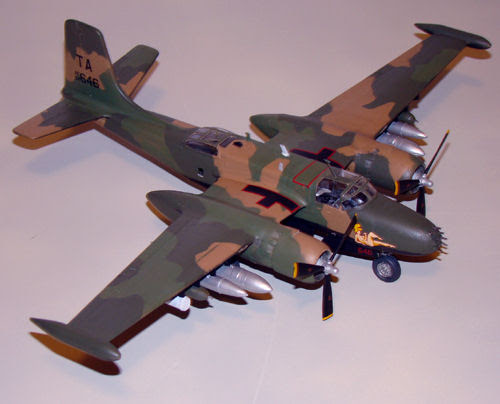 Italeri 1/72 scale B-26K/A-26A "Counter-Invader": This kit is a hold-over from last year. Kit decals. Finish is rattle can and Airbrush, then touched up by hand. Camouflage colours are Testor's Model Master and Polly-scale acrylic. Black is spray can from Wal-Mart. OOB except for True Details resin B-26K wheels and Minimeca stainless steely hypodermic tubing for the nose gun barrels. 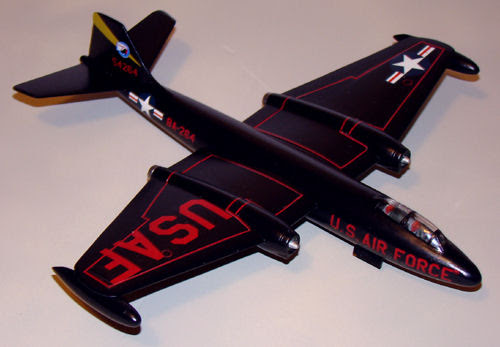 Revell 1/78 (Box scale) B-57B "Canberra": The first kit started and finished this year. Original molds for this kit go back to the late '50's. Currently available as an SSP release. This is a 30 year old "Air Commando" series kit bought from the sale table at the LHS. Previous owner had carved the pilot figures out of the one-piece cockpit. Cleaned up seats, added decal parachute harnesses and instrument panels. Some putty and sanding needed to fill seams at wing roots and tail.

Basic black paint again is rattle can from Wally-World. Decals from Italeri (yellow flash on tail) and Airfix (all the red markings)1/72 B-57 kits. The Italeri kit reds were not opaque enough and went almost invisible against the black. National insignia were Microscale. Gloss finish was several coats of Aeromaster clear semi-gloss applied with brush.
Posted by: James / 11:14 PM (0) comments